We do not know for sure the origin of this project – Mário Peixoto’s last. Everything suggests that it was an adaptation of “Maré Baixa” or “Mormaço”, a project carried out between 1935 and 1936 with Pedro Lima and which was later discontinued. It seems that, in 1948, Mário, invited by Afonso Campiglia to make a film, brought together the adaptation of “Maré baixa” with another script, “Onze almas”, and so “Sargaço” was born, directed by João Tinoco de Freitas under Mário Peixoto’s supervision. This project, together with “Muiraquitã”, which would be directed by Jonald (the movie critic of “A noite” newspaper), was spread far and wide but unexpectedly they were not heard about anymore and so the producers started to announce that they would make just one film, “Estrela da manhã”, with the script by Jorge Amado, direction by Jonald and photography by Rui Santos. Mário Peixoto’s name and “Sargaço” disappeared from the newspapers. Then, Mário turned “Sargaço” into “A alma segundo Salustre”. In 1950, Plínio Süssekind Rocha, taken by Francisco Luis de Almeida Salles to Vera Cruz, offered Alberto Cavalcanti the production of “Salustre”, but Cavalcanti refused it because Mário’s films, once again, did not match the paradigm which had been created for the Brazilian moviedom. In 1965, the “Banco do Estado da Guanabara” (Bank of the State of Guanabara) denied a petition for financing the movie. In 1971, it was announced that Brigite Bardot would be part of the cast. It is possible that Mário had promised to finance it, but the facts are shadowy. Between 1982 and 1983, Carlos Augusto Calil tried tenaciously to produce “A alma segundo Salustre”, with no success. But in 1983, he published, through Embrafilme (Brazilian Film Industry), the script of the film. Finally, in 1985, Rui Santos, linked up with a filmmaking company in Rio de Janeiro, got interested in the project. It was a new flop. Mário did not allow the owner of the filmmaking company to be the leading actress.

Since then, Mário Peixoto gave up trying to produce “Salustre” or any other film.

Considered a landmark in the Brazilian silent movies, “Barro Humano” was the embodiment of the aesthetic ideals of the publishers of Cinearte magazine. Based upon the industrially and artistically consistent Brazilian paradigm of cinema which they stood up for in the magazine, Adhemar Gonzaga, Pedro Lima, Paulo Wanderley and Álvaro Rocha decided to link up with the photographer and producer Paulo Benedetti to make “Barro Humano” in mid-1927. With a slow and troublesome production, this film was only finished in January 1929. The script, by Paulo Wanderley, told the story of two women, Vera (Gracia Morena) and Gilda (Lelita Rosa), who had had different upbringings but ended up having a similar fate. With the intention of portraying the customs and fashions of the city, “Barro Humano” was a total sell-out, and represented the confirmation of the cinematographic standard suggested by Cinearte magazine, which culminated in the foundation of Cinedia filmmaking company in 1930. 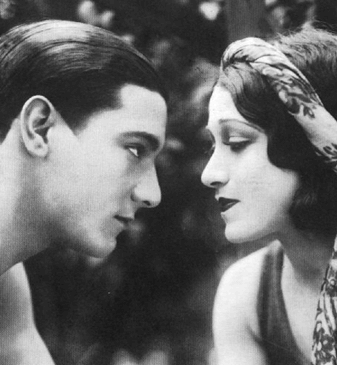 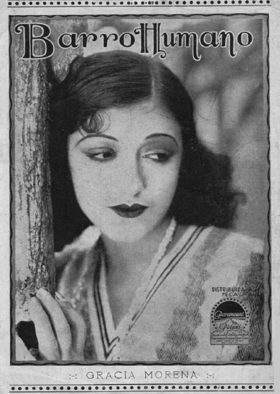 It was the first film club in Brazil and was founded on June 13, 1928 by Octávio de Faria, Plínio Süssekind Rocha, Cláudio Mello and Almir de Castro. The first three had been Mário’s schoolmates in “Santo Antonio Maria Zaccaria” School, in Catete (Rio de Janeiro). Almir de Castro had studied in “Santo Ignácio” School. The four were already university students when the club was founded: Octávio attended the Law School in Catete, Plínio the Polytechnical School and Almir and Cláudio the Medical School. The first club-house was in Plínio’s home, sited in Benjamin Constant Street, and later it was transferred to Cláudio Mello’s home, sited in Dona Anna Street, no. 62, which is nowadays the Journalist Orlando Dantas Street. The members, four at first, used to meet periodically to talk about films and cinema. Later, the club was enlarged; new memberships were taken and they started to show films. All the meetings were formal: the members had to submit their texts in writing to be talked about in future meetings. Some of those texts were then published in “O Fan”, the official periodical of the club. Among the discussions, the most important one was about the film “Sunrise”, because Plínio was against it while Octávio and Almir were in favor of it. It is possible to say that those debates came to Mário’s knowledge through the talks he had with Octávio de Faria, and that they might have exerted great influence on Mário’s cinematographic background. The Chaplin Club finished as a victim of the talkies and the college activities of its founder directors.

Founded on March 3, 1926 by Adhemar Gonzaga and Mário Bhering, it was the main movie publication of that time. It was inspired by the American fans magazines Classic and Photoplay.

Cinearte magazine fostered the first systematic campaign in defense of the Brazilian movie. Its publishers – Gonzaga, Bhering, Pedro Lima, Paulo Wanderley, Álvaro Rocha and Sérgio Barretto Filho – believed that a true movie industry would rise in Brazil, based on the standard of Hollywood. Besides fostering the North-American star system with a large profusion of photographs of the actors and actresses of Hollywood, Cinearte magazine regularly opened up spaces for debates about cinematographic techniques and educational films, trying to play the role of an opinion pollster and a spreader of the cinematographic culture throughout the country. Two landmarks in the history of the Brazilian movie of that time arose from the opinions defended by the magazine: the film “Barro Humano”, made in 1929 and Cinedia filmmaking company, founded in 1930. Cinearte magazine was distributed during 16 years, from March 1926 to July 1942. 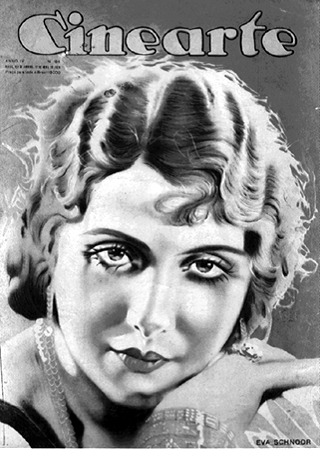 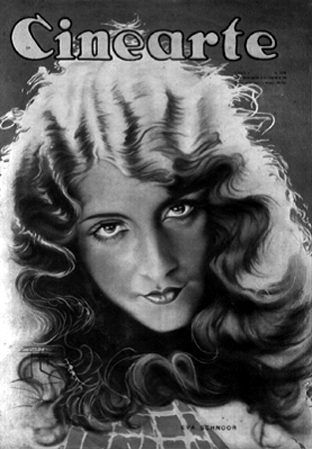 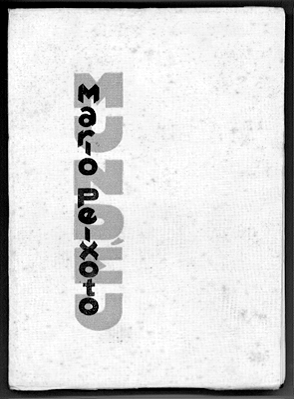 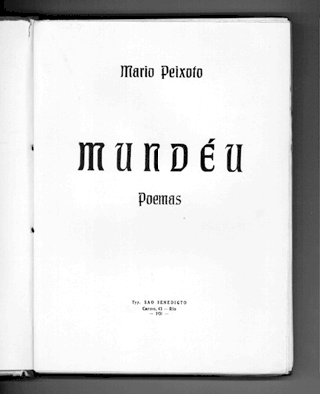 Mário Peixoto’s poem book, published in 1931 by São Benedicto printer’s, in Rio de Janeiro, with an edition financed by the author. The book was reviewed by Manoel Bandeira: “With penetrating voices from the childhood complexes and in the bleak atmosphere of the country life in the Southern region of Rio de Janeiro, Mário Peixoto’s poetry stands out for his tragic sense of existence and power, with a very typically Brazilian peculiar cadence” (wrapper of the first edition in 1931). The book was also reviewed favorably by Mário de Andrade. In 1996, Sette Letras publishing house brought out the second edition of this book.

This novel was first published in 1934. Mário went under the name of Mário de Breves. It was printed by the same publishing house that brought out Mundéu, São Benedicto, with the edition financed by Mário Peixoto. In 1935, the book was reprinted by Augusto Frederico Schmidt. This time Mário used his real name: Mário Peixoto. According to Mário, his father disliked the book, bought all the editions of 1934 or 1935 (we do not know for sure) and burnt them all. It was probably from 1967 on that Mário came across one of his editions of 1935 and started to enlarge it to six volumes. The first volume came into the market by Record Publishing House and Jorge Amado’s patronage in 1984. The remaining five volumes remained unpublished and now are filed in Mário Peixoto Archive Institute. In 1996, Sette Letras publishing house brought out the second edition from the book of 1934/1935. The script of this film was written by Mário Peixoto at Carmen Santos‘ request while “Limite” was being edited, because she would produce the film and star in it. It was first called “Sonolência”, and the manuscript is filed in Mário Peixoto Archive Institute. Its title was changed into “Onde a Terra Acaba” at Carmen Santos’ insistence for her not finding “Sonolência” a commercial name. They began filming it on May 13, 1931 on Sino Beach, in Marambaia spit. Carmen Santos, the star, acted alongside Raul Schnoor and Sylvio Schnoor, while Edgar Brasil photographed the production. It was probably between October and November that Mário and Carmen had a disagreement and so the filming was discontinued. Carmen proceeded with the production with a new plot – a film-version of the romance “Senhora” by José de Alencar, with other players and a new director, Octavio Gabus Mendes, who had just finished filming “Mulher” for Cinedia filmmaking company – but she kept the same title on account of the money already spent on advertising it. It is possible to say that Gabus Mendes had been appointed by Adhemar Gonzaga. Edgar Brasil continued being part of the staff while Rui Costa joined it. The film took a long time to be produced and when it was turned into Vitafone, it was shown in 1933. As it was a complete flop, it was shown for just three days. This film does not exist any longer because it was destroyed in a fire in Brasil Vox Filmes filmmaking company. In 1934, Carmen reconciled with Mário and gave him the copy of what he had filmed for the first edition of “Onde a Terra Acaba”. These fragments were filed in the Cinemateca Brasileira (Brazilian Cinematheque) but can be consulted in Mário Peixoto Archive Institute. In 1946, Mário Peixoto tried to refilm, with Carmen Santos, the script which he had turned into a talkie in 1932. Mário Peixoto changed the name to “O Sono Sobre a Areia”, but Carmen insisted that Mário kept it with the former title. The project was discontinued.

After the release of the CD-rom Limite, three posthumous books by Mário Perixoto were published in the 2000’s, organized by Saulo Pereira de Mello and edited by the Arquivo Mário Peixoto and by the publishing house Aeroplano.

Escritos Sobre Cinema (Writings on Film) brings together four articles dedicated to cinematic art, published in 2000. The first article is “Cinema caluniado” (“Slandered cinema”), written by Peixoto upon the request of Pedro Lima, in April 1937, after the reconciliation of Mário Peixoto with Carmen Santos. It was originally published in O Jornal, on May 6, 1937. The second article is “Motives para um diretor” (“The motives of a director”), published in O Jornal on August 31, 1947, and republished on July 4, 1948 in the same periodical, whose editor was Pedro Lima. The third article is entitled “Momento” (“Moment”), published in O Jornal, on September 19, 1948. The fourth and last article is the most famous of them. It is entitled “Um filme da América do Sul” (“A film from South America”), originally published in the magazine Arquitetura n. 30, in August of 1965, upon the request of Carlos Diegues. It is the article supposedly authored by the Soviet filmmaker and theorist Sergei Eisenstein, after seeing Limite in Paris. In reality, the article was written by Mário Peixoto himself, who invented the story according to which Eisenstein would have seen his film and written a review of it. Thus, for the first time, “Um filme da América da Sul” is published under its true authorship.

Poemas de Permeio com o Mar (Sea permeating poems) is a poetry anthology written between 1933 and 1955, and published in 2002. The relation to the sea and the strongly imagetic nature of the poems bring them close to the film Limite.